Do You Need More Management Horsepower? 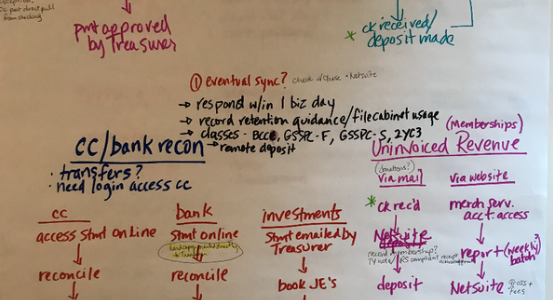 Why do business owners call us?
It differs a bit from the question “what do you do?” and it requires more than a one-word response.
We are frequently called in to assist businesses facing out of control growth, chaos with their finances, and people problems that affect their profitability.

The bottom line is, they need more management horsepower.
Case in point: we were contacted by a large educationally-focused non-profit that’s geographically dispersed across the United States.

They were trying to deliver on their mission, but they were hampered by the challenges presented by their virtual structure, which made it very difficult for an accounting clerk in a CPA firm to do their outsourced accounting.

Not to mention that the firm never really made an attempt to understand how their client functioned, the transactions that supported the execution of their mission, or what the financial reports needed in order to support the organization’s management.

This firm basically only recorded their checking account activity in their books which, when you go to do any analysis or provide any decision-making support to the organization, really doesn’t help drive management because there aren’t enough details being recorded to support the analysis.

You probably don’t need me to tell you why this is an issue, but I’m going to anyway: decision support can’t happen when transactions aren’t being recorded properly.

So, what did we find during the course of our work?
1. Lack of processes. The organization had poor control over their workflows, documents, and transactions leading to inadequate and improperly documented accounting records.

We weren’t the only ones who noticed it, either. Every year for the past 3 years, auditors made comments in their audit report about the deficiencies that hadn’t been addressed. It drove their finance committee crazy!

2. Undocumented policies. The virtual structure meant that the organization had to issue a lot of travel reimbursements. No problem.

But the travel reimbursement policy wasn’t on paper. It was somewhat fluid and open to interpretation, meaning there were no specific forms to receive the information, document the information, and evaluate it against the (non-existent) policy.

This drove the treasurer crazy! It created a lot of confusion and extra work for her, and it put a lot of pressure on her to have the “policy” in her head and make decisions against it.

That’s just one example of their many undocumented policies. Need I go on?

3. Over-engineered and under-utilized accounting system. A few years back, they had decided to let the most complex entity (out of 3 entities) within their group drive the system selection. Of course, they chose the one with the most complex structure.

The other 2 entities had to settle for an expensive system that couldn’t really be configured to their needs. The system’s inflexibility put them at a great disadvantage, and plus, it was really expensive!
So, what did we do about it?

Their poor controls are now replaced with strong internal controls. Their inadequately documented records are strengthened and recorded properly. Their new processes make those audit comments a thing of the past.

2. Document the policies. To deal with undocumented policies we….created documented policies! We made them a custom travel policy that addressed the uniqueness of their situation which reduced the amount of effort and confusion within the organization (along with the effort required for their treasurers!).

We created custom forms that they’re using with the folks getting travel reimbursements to more clearly communicate what the policies are, as well as what reimbursements are available to them. That takes the angst out of the entire process and results in a more efficient, less painful process!

3. Change the system. When it came to their over-engineered and under-utilized accounting system, we analyzed what they were doing within the system and what other systems might be more compatible and more cost effective for them to utilize.
There were a lot of moving parts to take into consideration, as we had to look at how the audit would be supported across all 3 entities.

We ended up getting the organization a system that truly matched their needs in a cost-effective manner. They got increased functionality, increased transparency with their numbers, and better internal controls and workflows.
Plus, they saved over $12k a year with their new, better system.

Was it magic? Nope. We do this all the time— and as you can see, we’re pretty good at it!
If you want what they got, just call us and let’s talk about how we can make it possible for you.